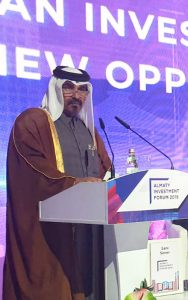 The delegation included board members Mohamed bin Ahmed al Obaidli, Mohamed Jawhar al Mohamed and Khalid bin Jabor al Kuwari as well as a number of Qatari businessmen.
The forum was inaugurated by Akim of Almaty city Bakytzhan Sagintayev.
Addressing the forum, Twar said Qatar and Kazakhstan are connected with special and fast-growing relations, affirming that the forum provided a good opportunity for all participants to discuss enhancing cooperation in investment fields and strengthening trade and economic relations between the Qatari private sector and its Kazakh counterpart.
Kuwari stressed that Qatar’s economy is open to all countries and welcomes all investors, pointing out that Qatar is interested to establish many external investments in line with its strategy of economic diversification.
“There are a lot of Qatari investments in several countries worldwide,’ he added.
He also noted that Qatari and Kazakh businessmen regularly exchanged visits to explore business opportunities available in both economies, referring that two years ago, Qatar Chamber hosted a large delegation of 50 Kazakh businessmen who met with their Qatari counterparts at the “Made in Qatar” expo and discussed ways of enhancing cooperation ties.
“During the visit, both countries’ chambers signed an memorandum of understanding (MoU) with the aim to strengthen cooperation between the private sectors and exchange information about economy and investment,” he said.
Kuwari outlined Qatar economy and investment climate, noting that Qatar has retained the crown of world’s largest exporter of liquefied natural gas (LNG) and it has remained the market leader with a share of 27.6 percent in the global LNG trade.
“Qatar has made a remarkable progress in building an economy which is among the world’s fast-growing economies thanks to the sound economic policies and its openness to all world economies,” he said, adding that the Qatari economy witnessed strong performance in the past two years, driven by the wise policies adopted by the state to stimulate investments in all sectors.
Qatar’s GDP stood at $225 billion in 2018. The Qatari economy is expected to grow by 2.7 percent in 2019 and 3 percent in 2020.
He assured that Qatari investors are interested to establish new investments outside Qatar in line with the country’s strategy of economic diversification, noting that Kazakhstan is a promising destination for foreign investments.
The Qatar Chamber delegation held several meetings with businessmen and companies’ representatives specialized in IT, communication and banks sectors.

Meanwhile, the Chamber’s delegation met with Bakytzhan Sagintayev, the governor of Almaty City, the two sides discussed trade and economic co-operation, activating co-operation between the two countries’ businessmen in all sectors, and exploring the available investment opportunities in both sides.