Qatar Chamber has issued its monthly economic newsletter for December 2020 which highlighted the most prominent trends in the Qatari economy, as well as statistics related to foreign trade and trade of private sector in October 2020. 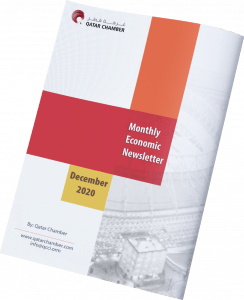 The report, prepared by QCs Research & Studies Department, highlighted a report about the state’s budget for 2021 which included total revenue amounted to QR 160.1bn and total expenditures estimated at QR194.7bn.

The newsletter said that the budget’s main indicators emphasized that the year 2021 would be a year of recovery for Qatar’s economy from the implications caused by the Covid-19 pandemic.

According to the budget, the GDP is expected to grow by 2.2 percent following a decline of 2.6 percent in 2020 due to the precautionary measures taken by the state to combat the pandemic.

The QC’s report also outlined a report on the state’s industrial sector during 2020, as official data said that the number of industrial facilities registered by the end of 2020 reached 927 compared to 862 at the beginning of the same year with the establishment of 65 new industrial factories in 2020.

The newsletter said that according to the figures given by The Planning and Statistics Authority for October 2020, the total the value of foreign merchandise trade statistics amounted to QR 23.6 billion, showing an increase of 15.7 % compared to September 2020, which amounted to QR 20.4 billion.

Therefore, the country’s trade balance, which represents the difference between total exports and imports, showed a surplus of QR 7 billion, recording an increase of 9.5 % compared to QR 6.4 billion in September.

In October 2020, China was at the top of the countries of destination of Qatar’s foreign trade with about QR 3.3 billion, a share of 14 percent of the state’s total foreign trade.

The report also featured the trade of private sector during October 2020 according to the certificate of origin issued by the Chamber which reached QR 1.240 billion, showing an increase of 13.7% compared to QR 1.091 in September.

This surge in private sector’s exports demonstrated that the Qatari economy has recovered from the repercussions of the Covid-19 pandemic and gradually started to return its levels before the crisis.

The private sector’s exports increased by 117% compared to April which was the lowest value during the year and by 37% compared to February which is the highest value.

The newsletter showed that the private sector exports through the General Model certificate of origin have the largest value in October, increasing 70% m-o-m compared to September 2020, while exports through other models decreased in varying percentages.

Exports through Unified GCC model decreased by 55.2%, followed by GSP and the Unified Arab model by 21.3%.

Goods exported through the Unified GCC certificate of origin for exporting to Singapore amounted to $ 13mn in October, while there are no exports registered in September.

According to the type of commodities, exports of petrochemicals have seen a sharp increase of 1000% from QR 31 million in September to QR 382 million in October, while exports of aluminum and essential & industrial oils decreased by 13% and 25% respectively.

Exports of chemical substances, lutreine and steel recorded an increase of 14%, 2% and 100% respectively, while exports of paraffin and Helium gas & industrial gas decreased by 83% and 32%.

In October 2020, Italy was at the top of the countries of destination of private sector’s exports with close to QR 336 million, a share of 27.1 percent of the total exports, followed by India with almost QR 279 million and a share of 22.5 percent, and Germany with about QR 124 million, a share of 10 percent.

At the level of blocs and groupings, EU countries were at the top of economic blocs that received exports of private sector amounted to QR 555 million with a share of 44.7 % of the total value, followed by Asian states with a share of 41.5% with exports of QR 515 million.

The group of other European countries and other American countries received exports of values 0.20% and 0.06%, while no exports received by the USA.