Qatar Chamber (QC) has urged the transport and logistic companies wishing to join International Customs Transport (TIR) system to submit their documents to the QC to be enrolled in the list of companies authorised to use the system in export and import operations.

The TIR is an international system of transport and customs guarantee that is globally applicable. It allows the transportation of goods from the country of origin through transit countries to the country of destination in sealed containers subject to customs control through a mutually recognised multilateral system.

The companies wishing to use TIR system shall have at least three years of experience in the international border transportion, and Qatar Chamber will be the guarantor of customs duties, QC Chairman Sheikh Khalifa bin Jassem al Thani has said.

The system is also considered as one of the easiest, safest and most reliable means of transporting goods across multiple international borders, thus saving time and money for transport operators and customs authorities.

In a press statement on Monday, Sheikh Khalifa said QC joined the World Organisation of Land Transport late last year and became the guarantor and launcher of the national version of TIR system for international land transport in Qatar in coordination with the General Authority of Customs. 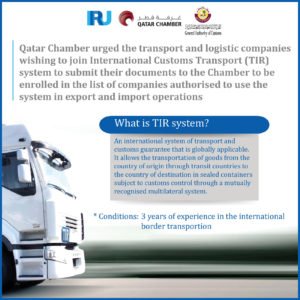 The QC would select companies that meet the conditions for using this system, he pointed out.
Sheikh Khalifa said the implementation of TIR system for international land border transportion comes within the framework of facilitating trade, reducing transport and shipping costs for traders and facilitating the land transportion of goods.

He said that TIR system is working to mainstream border procedures to reduce the administrative burden on customs authorities as well as transport and logistics companies.

It also aims to significantly reduce waiting time on border in order to save money and time, he added.
TIR authorised carriers can quickly transport goods through multiple customs zones under customs control using a single guarantee, where operators are required to submit their permit information only once at border crossing.

With more than 70 contracting countries worldwide, TIR system is rapidly expanding, where more than 20 countries are looking forward to joining it in the coming years.

More than 34,000 transport and logistics companies rely on TIR system to deliver goods quickly and reliably across the international borders.

The system is available only to authorised operators who have access to the system from the Customs Department in cooperation with national TIR authorities.

The criteria for joining TIR are based on the company’s professionalism and level of compliance, rather than on the size of the company or its fleet, where TIR system is available to small and medium-sized companies as well as large carriers.

The system can be mainstreamed through TIR consignors and consignees and thus joins the approved national and regional economic transport systems.

Goods transported under TIR arrive at the border in containers sealed by the departure customs clearance office. Containers used in TIR operations are subject to prior customs clearance, ensuring that no goods are added or removed without detection, thus reducing the time required for routine physical inspections on borders along the road.

Modern TIR information technology tools ensure that all public and private actors involved in TIR process have access to the data they need.

Such tools allow the electronic sending of shipment details simultaneously to multiple border crossings before the shipment reaches entries and exits. This enables customs officers to conduct better risk assessments, prioritise inspections and facilitate compliance with the shipment information electronically sent in advance, which is mandatory for shipping goods to multiple jurisdictions.

TIR system is globally applicable, where it uses one international guarantee to eliminate the need for costly guarantees in each transit country. The system is also easy to implement, where all legal and procedural frameworks, capacity building and information technologies are available.