In its quarterly report issued recently, Qatar Chamber pointed out that the private sector exports value during the second quarter of 2022 amounted to QAR 8.92 billion, representing a 21% growth on an annualised basis compared to QR 7,73 billion in Q2-2021. On a quarterly basis, it also surged 15.4 percent compared to QR 7.73 billion in Q1-2022.

QC report affirmed that his surge clearly confirms the ability of the private sector and the Qatari economy, in general, to adapt to normal and abnormal economic conditions and to achieve rising growth rates, especially after the Covid-19 pandemic.

The newsletter also said according to the type of certificate of origin issued by the Chamber, the value of exports through the GSP model rose by 135 percent on a yearly basis, the Unified Arab model by 60.7 percent, the Unified GCC model by 249 percent, the General model by 10.3 percent and the Singapore model by 8.8 percent.

Exports according to the type of goods
QC report showed that this surge is attributed to the increase in exports of 4 out of 10 four commodities during Q2.

Lotrene exports reached QR 388.5 million compared to QR 334.9 million last year, representing a 16% increase, while chemical fertilizers exports increased sharply by 5.652.4%, which amounted to QR355.5 million, while its value during Q2-2021, was only QR6.18 million. 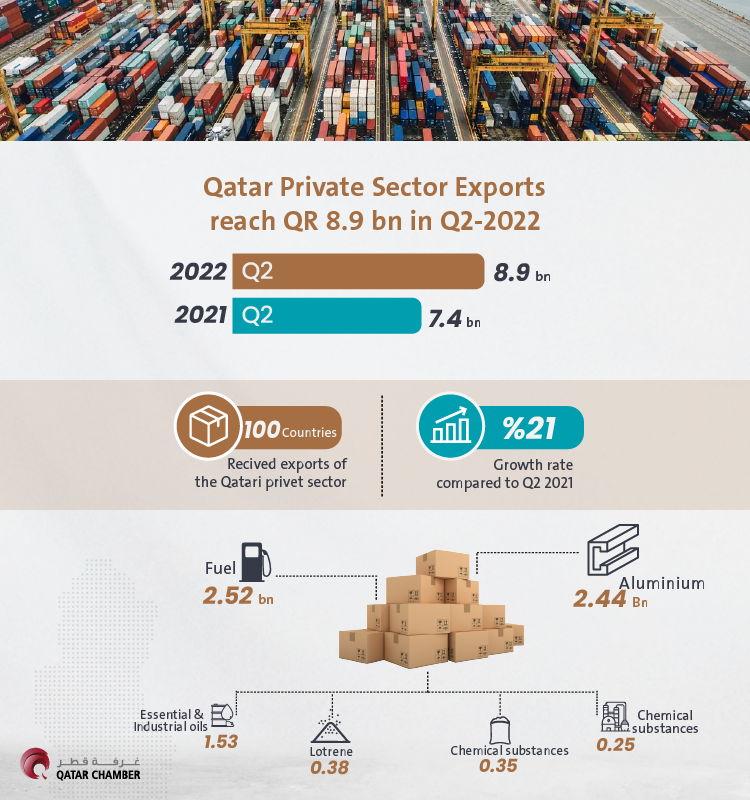 The report indicated that these ten commodities exported by the private sector represent 91% of the total value of private export exports, according to the certificates of origin issued by the Qatar Chamber during Q2 of 2022, which amounted to QR 8,094.45 million, registering a 11.7 % y-on-y growth compared to Q2-2021 and a 9.5% quarter-on-quarter growth compared to Q1-2022.

In third place came the group of EU states, with exports totaling QR 1,6 billion representing 17.8 percent of the total value, followed by Arab countries excluding Arab countries excluding GCC states that received QR 370 million, a share of 4.2 percent and the USA with exports amounted to QR 364.2 million, or a share of 4.1 percent of the total exports.

Then came the grouping of Oceania countries, with exports amounting to QR 1.9 million, equivalent to 0.02% of the total exports.

The newsletter said that the number of countries receiving Qatari exports in Q2-2022 was 100 countries in the above economic groupings. The African grouping came to the forefront with 28 countries. Asia came then with 17 countries, followed by the European Union and other American countries with 15 countries each, then Arab countries excluding GCC states with 13 countries, then the GCC and other European countries with 5, and lastly, the USA and one country (Australia) in the Oceania grouping.

Private sector trade partners
In Q2-2022, India was at the top of the countries of destination of private sector exports with close to QR 1,8 billion, a share of 20.1 percent of the total exports.

It is followed by Oman with almost QR 1,61 billion and a share of 18 percent and Netherlands with about QR 953 million, a share of 10.7 percent.

Together, these ten countries accounted for 83.4% and a value of QR 7,435.2 million 6 of private-sector exports according to the certificate of origin during Q2 of 2022, totaling around QR 8,920.2 million.