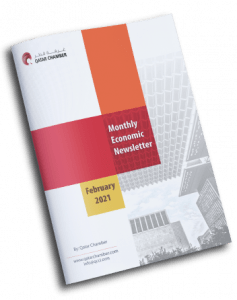 Qatar Chamber has issued its monthly economic newsletter for February which highlighted the most prominent trends in the Qatari economy, as well as statistics related to foreign trade and trade of private sector in December 2020.

The newsletter, prepared by QCs Research & Studies Department, highlighted a report about the Asian Cooperation Dialogue. The report said that the State of Qatar attaches great importance to the Asian Co-operation Dialogue, based on its firm belief in the importance, prestige and role of this dialogue in strengthening relations between member states. It stressed that Asia represents an important strategic alley and trade partner, stating that Asian markets received 80% of Qatari exports.

Qatar’s keenness to cooperate with ACD is evident through the active Qatari presence in all ministerial meeting and also through the important initiatives offered by Qatar to achieve the ACD’s objectives.

During the meeting, Qatar offered to host the ACD Business Forum to establish ACD business platform for private sector to strengthen SMEs across Asia. The initiative was highly welcomed by all member countries.

Based on this initiative, the 1st Virtual Conference of the Chamber of Commerce & Industry of the Asian Cooperation Dialogue Member Countries (ACD) was held on January 20, 2021.

Qatar Chamber’s First Vice Chairman HE Mohamed bin Ahmed bin Twar Al Kuwari presided over the Chamber’s delegation participating in the conference. During the meeting, Al Kuwari invited participants to establish businesses and partnerships in Qatar and benefit from the durability of Qatari economy and incentives offered for foreign investors.

In recognition to Qatar’s leading role in achieving the objectives set by the ACD, member countries highly welcomed the generous offer of Qatar to host the 3rd ACD Summit in 2021.

The QC’s newsletter also outlined a report on the State’s foreign trade which included also private sector trade according to certificates of origin issued by the Chamber.

The newsletter said that according to the figures given by The Planning and Statistics Authority for December 2020, the total value of foreign merchandise trade amounted to QR 25.6 billion, showing an increase of 6.2 % compared to November 2020, which amounted to QR 24.1 billion.

In December 2020, the total exports of goods (including exports of goods of domestic origin and re-exports) amounted to around QR 17.7 billion, showing an increase of 3 percent compared to QR 16.6 billion in November.

The imports of goods in December 2020 amounted to around QR 8.5 billion, showing an increase of 13.3 % compared to QR 7.5 billion in November.

Therefore, the country’s foreign merchandise trade balance, which represents the difference between total exports and imports, showed a surplus of QR 8.6 billion almost, recording a decrease of 5.5 % compared to QR 9.1billion in November.

In December 2020, China was at the top of the countries of destination of Qatar’s foreign trade with about QR 4.1 billion, a share of 16 percent of the state’s total foreign trade.

The report also featured the trade of private sector during December 2020 according to the certificate of origin issued by the Chamber which exceeded QR 1.333 billion, showing a month-on-month increase of 13.4% compared to QR 1.175 billion in November.

This increase in private sector’s exports is attributed to the sharp increase of 286% in exports through the Unified GCC Model certificate of origin which increased from QR 99 million to QR 382 million.

The QC’s newsletter also said the total value of private sector in 2020 amounted to QR 14.9 billion compared to QR 21.6 billion, a decrease by 30% due to the repercussions of the Covid-19 pandemic which has cast shadows on global trade.

According to the type of commodities, the private sector’s exports of industrial gases topped the list of exports with exports amounted to QR 405 million, recording an increase of 146% compared to QR 164 million in November.

In December 2020, Oman was at the top of the countries of destination of private sector’s exports with close to QR 362 million, a share of 27.13 percent of the total exports.

It was followed by India with almost QR 217 million and a share of 16.3 percent and Netherlands with about QR 124 million, a share of 9.34 percent.

At the level of blocs and groupings, Asian countries were at the top of economic blocs that received exports of private sector amounted to QR 658 million with a share of 49.4 % of the total value, followed by GCC states with a share of 28.8% with exports of QR 384 million.

The group of African countries (excluding Arab states) came in sixth place with exports amounted to QR 5 million, a share of 0.36, followed by the group of other

other American countries and Other European countries which received exports of values 0.08% and 0.05% respectively.