The total value of Qatar’s foreign merchandise trade in January 2021 stood at QR29.1bn, reflecting a 13.7 percent growth compared to QR25.6bn in December 2020, according to Qatar Chamber’s latest monthly economic newsletter. 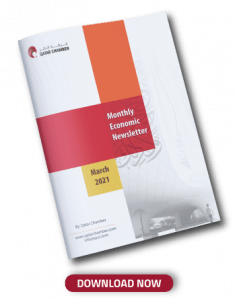 The March 2020 issue of the chamber’s newsletter cited figures from the Planning and Statistics Authority (PSA) about the total value of Qatar’s foreign merchandise trade in January 2021, and the private sector’s exports according to certificates of origin issued by the chamber.

The newsletter, prepared by QCs Research & Studies Department, highlighted a report about the chamber’s activities held last year which were presented by its Chairman HE Sheikh Khalifa bin Jassim Al Thani during the general assembly meeting held on March 3.

The newsletter also said that the total exports of goods in January, including those of domestic origin and re-exports, amounted to around QR21.3bn, showing an increase of 24.6 percent compared to QR17.7bn in December.

The imports of goods during the same month stood at QR7.8bn, showing a decrease of 8.2 percent compared to QR8.5bn in December.

“Therefore, the country’s foreign merchandise trade balance, which represents the difference between total exports and imports, showed a surplus of QR13.5bn almost, recording an increase of 57 percent compared to QR8.6bn in December,” the newsletter stated.

The newsletter reported that China was Qatar’s largest trade partner in January with trade exchange volume close to QR5.7bn, or a share of 19.6 percent of Qatar’s total foreign trade.

The increase in the private sector’s exports is attributed to a considerable increase of 20.1 percent in exports through the General model certificate which increased by QR 160 million.

While exports through GCC model certificate decreased by 32.9 percent.

The newsletter also noted that the surge in private sector’s exports emphasized the ability of private sector and the national economy in general to overcome the repercussions of the Covid-19 pandemic and rebound to its levels before the pandemic.

On the other hand, exports of other commodities such as petrochemical, paraffin, essential oils and industrial gases showed a decrease of 28.1 percent, 8.6 percent, 3.5 percent, and 1.9 percent respectively.

India was at the top of the countries of destination of private sector’s exports with close to QR309mn, or a 20.6 percent share of the total exports.

It is followed by Oman with almost QR207mn, or a share of 13.8 percent, and Netherlands with about QR135mn, or a 9 percent share.

Singapore came in fourth place with almost QR129mn, a share of 8.6 percent and Hong Kong with about QR112mn, a share of 7.5 percent.

The private sector exports to these countries represented 59.5 percent of the total value of exports during the same month.