The Qatar Chamber has issued on Sunday its monthly economic newsletter for May 2020 which highlights the most prominent trends in the Qatari economy as well as statistics related to the foreign trade. 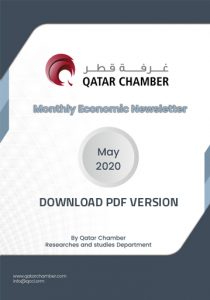 The issue touched on the preparedness of the private sector to implement the state’s strategies and economic development plans. It highlighted the speech of HH The Amir Sheikh Tamim bin Hamad Al Thani on the occasion of the advent of the Holy Month of Ramadan.

The issues said that the speech included many directives and decisions that represent key features of the roadmap for Qatar toward a more diversified, sustainable, and flexible economy against crises.

It noted that the Amir’s speech has come amid the crisis of the Covid -19 pandemic while most of the world countries had to close, most economic activities hindered, and oil prices declined.

The issue also elaborated the global forecasts on effects of Corona on world economies that expected that the US economy will shrink 5.5% in the second quarter of 2020, the steepest drop for 60 years, with a huge 20% unemployment, while in the Euro area, experts expect a 10 to 15% contraction in its economy, while growth in Asian economies will be disrupted for the first time in 60 years.

The International Monetary Fund has warned of economic damage that will be significantly higher than the global financial crisis of 2009 and the Asian Crisis of 1997.

It included the state’s foreign trade during March including the private sector’s trade according to the certificates of origin issued by the chamber for exporting companies.

The report said that according to the figures given by The Planning and Statistics Authority for March 2020, the total the value of foreign merchandise trade statistics amounted to QR 24.2 billion, showing a decrease of 16.6% compared to February 2020, amounted to QR 29 billion.

In March 2020, the total exports of goods (including exports of goods of domestic origin and re-exports) amounted to around QR 15.9 billion, while the Qatari imports during the same month amounted to about QR 8.3 billion. Therefore, the foreign merchandise trade balance, which represents the difference between total exports and imports, showed a surplus of QR 7.6 billion, recording a decrease of 44.1% compared to QR 13.6 billion in February 2020.

Regarding the private sector’s total exports during March, the Qatar Chamber’s data showed that they reached QR 1.944 billion, with a slight decrease of 0.5% compared to QR 1.954 billion in February.

The reports said that exports through the “General Model” certificate of origin form is the largest value, amounted to QR 817.1 million, decreasing by (18%) than the value of February. Exports through GSP came in the second place with a total value of about QR 730 million, recording an increase of 57%, followed by exports of the GCC model with a value of about QR 346.2 million (18% decrease) and Unified Arab certificate with a value of QR 50.2 million.

However, no goods were exported through the Unified GCC Certificate of Origin for exporting to Singapore.